First computer I ever owned was a 1986 Macintosh and I have been using Macs ever since. After completing Optometry school, I joined a practice that was not computerized (1987) and due to my familiarity with the Apple macintosh, that was my platform choice. At the time, the only Mac software for medical offices that I could find was an application called MediMac from Healthcare Communications. We found the interface easy to use and the staff quickly became very proficient at using it.

This was at a time when a 20 MB hard drive was huge and 512K of memory was common. Backing up the data file to floppy disc could take an hour and use 15 discs! This product served us well, but as Mac OS improved, the MediMac software became outdated. MacHealth was eventually bought out in the late 1990's and the new company no longer promoted or developed the product.

In 2004, we were thrilled to learn that the original MediMac programmer, Patrick Clyne, had started up a new company named MacPractice.

MacPractice 20/20 has surpassed all of my expectations. All of the items we had hoped for in MediMac have been made available to us in MacPractice plus many more. Our employees actually enjoy using the software, especially the coding and billing functions, and those with past experience with other medical systems remark how MacPractice is more intuitive and manageable. When we have had issues with the billing and insurance submissions, technical support has been able to create a solution to meet our needs, and in a very short period of time.

MacPractice has been able to import our current exam and office forms into the system as templates, which at this point is our most efficient way of charting. Specialized testing such as ocular photography and Optical Coherence Tomography images are easily imported into the software, which allows us to review these images in the exam room or on any computer in the office. This hybrid approach will help us as we work to being totally electronic in the future.

MacPractice software also allows me to access my records at home on my laptop computer using a VPN. I have also found the iPhone interface to be helpful when I have to answer after hours calls from patients needing Rx refills, etc.

Finally, the entire MacPractice team continues to be enthusiastic about the platform and they strive to improve the product by listening to our problems and suggestions. Customer service is outstanding and is truly one of the most important aspects of our success with the software!

Based on the experience in my optometry office, I recommended MacPractice to my wife when she started her Family Medicine Practice. The flexibility of the MacPractice software has allowed her to adapt it to her needs in a busy 2 office practice with over 25 computers on the network. 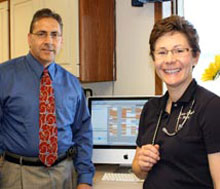 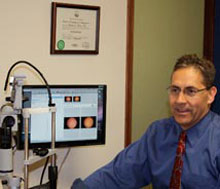