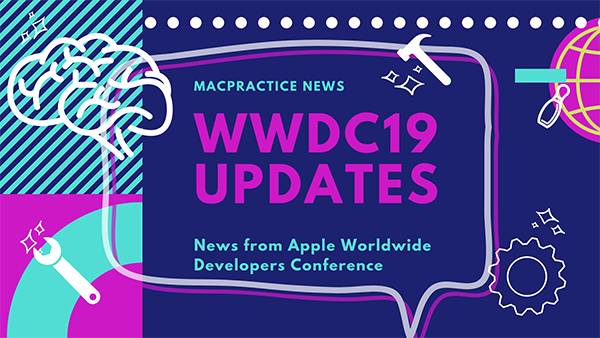 Apple's huge developer conference, Apple Worldwide Developers Conference (WWDC), returned to Santa Jose on Monday, June 3 with a full keynote of announcements ranging from new Memoji personalization options to an all-new Mac Pro. With the event wrapping up on Friday, June 7, here a few key takeaways to help you get caught up on the most important news. For an overview of all updates, see Apple's WWDC19 Event page.

The announcement of Dark Mode may have gotten the biggest gasp, but new security features for iOS took center stage for us. Apps can now be set to ask each time they attempt to access your location data, meaning no more quietly logging your location when you aren't using the product. A simple but effective security and privacy tool the new iOS will introduce for use with third-party apps is the option to hide personal email addresses. Apple will then create a random email account that will forward any messages the third-party sends to your actual email, keeping your data private.

Apple has also announced that iOS will get a new single sign-on feature that uses Face ID authentication to log in, and a secure video mode that encrypts videos locally. Siri will enjoy a bit of a voice makeover as the voice is generated by neural text-to-speech technology instead of a voice recording. Lastly, the iPad will get it's own version iPad-specific version of iOS as it is now widely recognized as its own platform.

New MacOS Catalina announcements confirmed much of what has already been leaked with a few key twists sure to please. You may have already said goodbye to iTunes, but now the end is official â€“ the app will be split into three new apps; Music, Podcasts, and TV. Apple also announced a new Sidecar feature that supports the iPad as a secondary display with both wireless and wired touchscreen control.

One security feature of note is that Catalina process voice to text on the local machine, rather than sending any of your voice data to the cloud. This comes with a heavy dose of new features, including voice control for opening apps, editing text, and more.

Apple says they've made their coding language, Swift, even faster by requiring fewer lines of code. The new SwiftUI framework allows coding to start with drag and drop to build various Apple OS apps, from the Watch to TV to the iPad. Developers can also now access Project Catalyst, a framework that lets developers port iPad apps to the Mac.

The new Mac Pro has been completely redesigned into a shape that some are calling a 'cheese grater' but is ultimately designed for maximum airflow. Mac Pro supports up to 28 cores and up to 1.5TB. A new processing card supports up to three streams of 8K or 12 streams of 4K, and the monitor is a 32-inch LCD screen with a Retina 6K display. Available next fall, the Mac Pro starts with an 8-core Intel Xeon, 32GB of memory, and a 512GB SSD for $5,999, while the Pro Display XDR is $4,999.