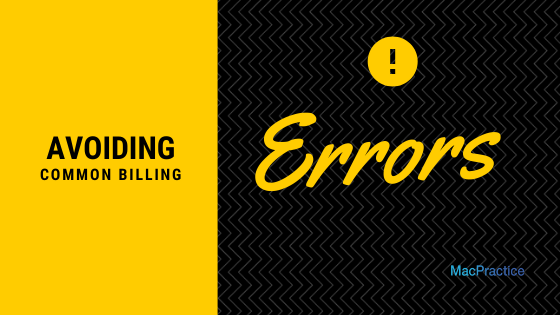 According to Medical Billing Advocates of America, up to 80% of medical bills contain errors, and it’s not just in hospitals – small to mid-size practices lose revenue and valuable staff time to avoidable mistakes, too. We’ve captured a list of some of the most common billing errors for practices similar to the average MacPractice client.

One of the standard billing errors for small practices is a missing or invalid procedure code, which also results in a lot of rejections. Often, the claim contains a procedure code flagged as invalid because it was not an active code for the submitted date of service, or the incorrect procedure code was entered. Procedure codes (CPT and HCPCS Codes), along with Diagnosis (ICD-10) codes, are typically updated every year. Stay up to date to avoid this error.

It may seem like a best practice, but a recent study found that one-quarter of practices never verify patient eligibility or copay amounts. Automated tools like MacPractice’s Eligibility Checking seamlessly verify eligibility to avoid errors and rejections. These tools more than pay for themselves, considering the reduced revenue and increased bad write-offs.

If you’ve already received a rejection due to eligibility, you may also consider that the patient may have a new insurance card with a new subscriber ID or group number, or demographic information (such as the birthdate) may be entered incorrectly in MacPractice.

Out of Touch with Current Payer Requirements

Staying up to date with payer requirements is necessary. Failure to notice a change can slow down your cash flow and leave you with a pile of rejected claims to address. At MacPractice, we take care to stay on top of any significant structural changes that require software updates such as changes to provider identification number structure. We also have an entire department, MacPractice EDI, dedicated to supporting our clients in their billing and keeping our Engineering team aware of upcoming changes.

Across the board, Duplicate Claim errors are often due to a simple mistake, like resubmitting a claim instead of a follow-up or not removing a cancelled procedure. MacPractice is designed to avoid Duplicate Claims in many of the common instances that are reported across the board. However, it still can happen in cases in which claims are affected by an interruption in a slower network, a crash during the sending process, or if a biller accidentally clicks the Send button while the initial send process is still going.

Pay close attention to claim reports from both the clearinghouse and payer to help sort out any duplicate claim confusion. Always check the reports for additional rejections, as the duplicate may not be the only one listed, especially if the duplication happened during a period of networking issues.

Practices may be overwhelmed when claims are rejected due to coding errors, especially if they don’t have the tools or support necessary to find the data to issue a challenge. You may not have the time, expertise, or staff to approach the process of filing corrected claims and appeal letters with confidence due to any number of issues. Unfortunately, this is creating a lot of lost revenue for practices across the nation. If you are in a billing crisis or short-staffed, we have short term, long term, or even hourly plans to get you back to billing bliss.

Collect more, faster with billing from MacPractice Business Services. Your clinical skills and our billing expertise will keep your practice financially sound while you focus on patient care. You’ll collect faster, even amid declining revenues and increasing billing complexity.